It’s been a busy few weeks for me. I’ll start with the disappointing news, and that is the sequel is still at the editor due to unavoidable delays. When I get it back it will still be the best part of three weeks for the final polish and production of the eBook. I’m still aiming for late August to mid September. That’s still almost two months later than I would have liked but that’s publishing for you. Writing, it seems, is only half the job when you are an Indie.

In the meantime, I’m going to tease some more with another fragment of the sequel’s cover. Guess who this is… 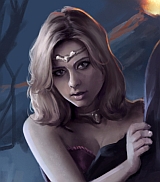 And finally, I hope to bring more news on a different front in the very near future regarding the first book. Watch this space.

This site uses Akismet to reduce spam. Learn how your comment data is processed.

This website uses cookies to improve your experience while you navigate through the website. Out of these, the cookies that are categorized as necessary are stored on your browser as they are essential for the working of basic functionalities of the website. We also use third-party cookies that help us analyze and understand how you use this website. These cookies will be stored in your browser only with your consent. You also have the option to opt-out of these cookies. But opting out of some of these cookies may affect your browsing experience.
Necessary Always Enabled

Any cookies that may not be particularly necessary for the website to function and is used specifically to collect user personal data via analytics, ads, other embedded contents are termed as non-necessary cookies. It is mandatory to procure user consent prior to running these cookies on your website.